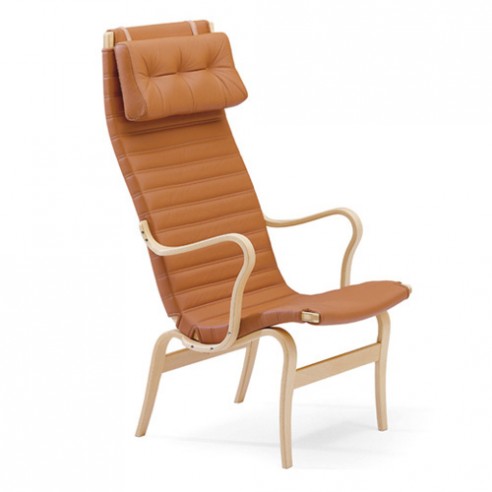 Bruno Mathsson had introduced his three basic chair models, easy, working and lounge chair Model 36,  in the late 1930’s but had not finalised his thoughts on aesthetics and construction details on all three variants to his satisfaction. As early as 1938 Mathsson designed a high back version with forward tilting neck support for use by older people.

It was to take almost ten years for Mathsson to resolve matters and the work chair which was named Eva in 1978 became more beautiful as it evolved over the years. The

sitting position became more upright and the construction more streamlined with the stretchers being placed directly under the seat.

Eva High is manufactured with a solid birch frame supported on an under frame with or without arms in laminated beech.  Upholstery is in plaited hemp webbing, sheepskin or fully upholstered in Tonus fabric or Elmosoft leather over polyether (CHMR) foam with a supporting web. When upholstered the fabric or leather is stitched horizontally with parallel lines.