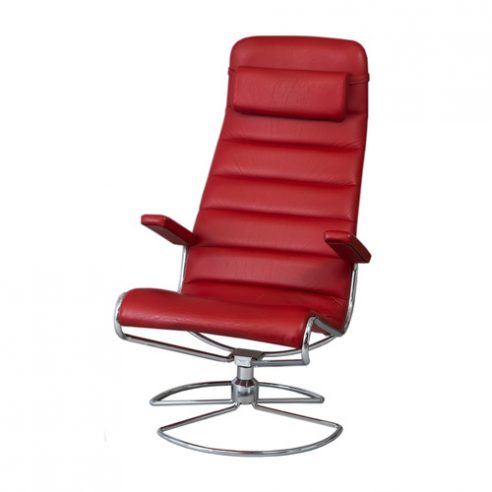 Minister is the last chair Bruno Mathsson designed before his death in 1987. It is a at tall soft upholstered easy chair mounted on a on a swivel base of tubular steel.  The combination of upholstery supported by webbing wrapped around a steel frame gives excellent support for long periods of relaxation.

Bruno Mathsson continued his experiments with tubular steel following the introduction of the Jetson 66 chair in 1966. He had been attracted to the possibility of creating  new forms of resilient furniture combining lightness with good

Mathsson had returned to the theme in the early 1970’s with a collection of high density stacking chairs including the commercially successful conference chair Mia series. In the mid 1970’s a new series appeared including Milton and Mirja designed specifically as conference chairs. The names (all beginning with the letter “M” a trait Mathsson gave to all his chairs designed for Bruno Mathsson International) simply defined the type of base fitted to the same button stitched upholstery.

In the early 1980’s a new series of height adjustable chairs, were added to the range and Minister was the final conclusion to Mathsson’s experiments with tubular steel completed in 1986.