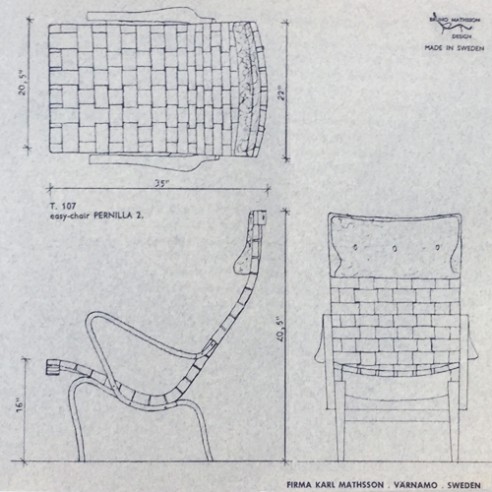 Bruno Mathsson had introduced his three basic chair models, easy, working and lounge chair Model 36,  in the late 1930’s but had not finalised his thoughts on aesthetics and construction details on all three variants to his satisfaction. It was to take almost ten years for Mathsson to resolve matters although by 1942 he had designed the profile of the armrests and decided on a forward tilt to support the head.

Pernilla 2 can be upholstered in plaited webbing, sheepskin or fully upholstered in Tonus fabric or Elmosoft leather over polyether (CHMR) foam with a supporting web. When upholstered the fabric or leather is stitched horizontally with parallel seams.

Mathsson was visited in Värnamo by the journalist, Pernilla Tunberger from Dagens Nyheter. Mathsson was so pleased with the article she published after their meeting that he named a redesigned easy chair with the back tilted further backwards after her – “Pernilla 1”.

In 1944 the profile of the chair was further modified with an angle to improve comfort between that of the work chair and Pernilla 1. In this final version,  Pernilla 2. Bruno Mathsson settled on a sitting position that did not fully recline but offered excellent sitting comfort.

Resting on a supporting under frame with arms formed in laminated beech the solid birch  frame of Pernilla 2 provides firm support to the back while the forward tilting head rest secures an upholstered pillow for the neck and head.