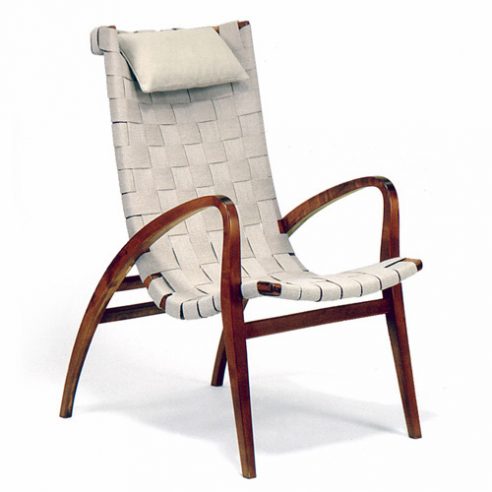 In 1930 Bruno Mathsson was given the opportunity to put the conclusions he had reached from his studies at the Röhsska institute into practice with a commission to design a new chair for the paitients of the Värnamo hospital.

His idea for designing a comfortable chair without traditional spring upholstery led to this unusual solution.

In 1992 Bruno Mathsson International produced a limited series of 100 Grasshopper chairs.The commission to the young Mathsson came from the chief physician of Värnamo hospital, Gunner Vidfelt, as part of the expansion plans to add an additional floor to the hospital in 1931.

This was the first such opoortnity  for Mathsson to design furniture for such a large public institution and to test his theories on using hemp webbing to support the weight of the user.

Mathsson had seen how hemp had been used in several chairs exhibited at the Stockholm Exhibition in 1930 that had launched the Swedish functionalist movement. Mathsson concluded that the simple low cost mataerial  was the solution he was looking for to provide support and comfort as an alternative to traditionally constructed upholstery.

The chair subsequently nicknamed “The Grasshopper” by the hospital staff was a radical expression of Mathsson’s interpretation of the functionalist’s approach.  Comprising of a frame covered with plaited webbing supported by arms and legs in solid birch. The design was controversial and were hidden from view by hospital staff to reemerge as Mathsson’s reputation grew.