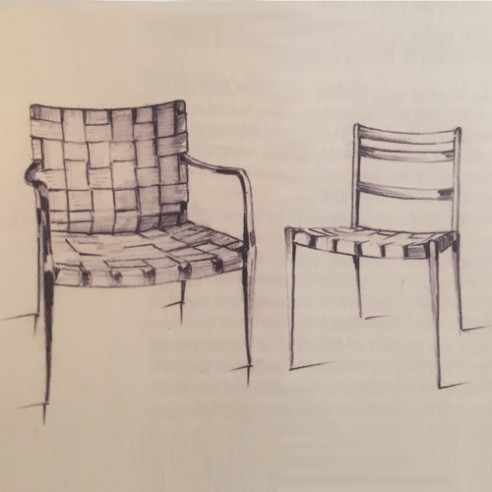 As a member of the Swedish Society of Crafts and Design, Bruno Mathsson was able to submit his ideas and contribute to its pattern collection.

In 1931 he sent his sketch of a simple comfortable armchair with hemp webbing to the director of the society, Gregor Paulsson. Mathsson received a payment of 50 kroner² for his contribution and the society incorporated his chair design into its pattern collection¹.

A drawing dated 1930, shows an illustration of a simple classic chair with legs reinforced by stretchers to the front and sides. In 1931 a similar chair reappeared  with the stretchers removed in a drawing³ alongside an elegant light weight dining chair.

produced today under the name ‘Mimat’. Mimat can be found in Mathsson’s first catalogue where it is described as “as a good representative of a modern, rationally shaped standard-type chair with a braided hemp-webbing seat suitable for large scale production – designed and drawn by me”

The seat of the chair is tilted back and the four legs taper down towards the floor. The back legs continue upwards, slightly arched and tapered to support the back of the chair.

Mimat is the earliest example of Bruno Mathsson’s exception sense of proportion and scale. It can be seen as a natural evolution of an extensive cabinet making tradition influenced by his father’s highly trained sensitivity of the nature and characteristics of wood.

By removing the stretchers between the legs the young Bruno Mathsson created a light elegant solution for a traditional chair type.